Pearl is one of our children. She was helping clean up the family’s home after a typhoon.  She was carrying her baby brother and tripped on debris and fell.

To protect her brother, she held ou 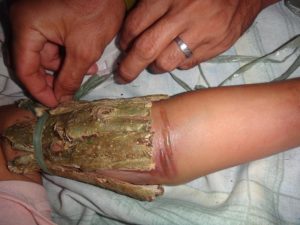 t her free arm to break her fall. When she did that, she broke her arm between the elbow and her shoulder.

The hospital would not treat her until the parents paid the equivalent of $250 USD.  That seems to be quite common to refuse treatment until payment is made.  The hospital also said that surgery was needed to fully repair the arm and that would be around  $1,000 USD.  They also told them that she would not be able to use her arm without treatment.

The parents didn’t have anywhere close to the money just to do the minimum, let alone the full treatment.

I got a text from Babeselle saying,  Please call Papa, emergency.”  I called and she told me what had happened and that Pearl’s parents were desperate.

At that time,  there was a person in the village that had a digital camera. She used it to send me pictures of the arm.

I went online and sent pictures and told them how to use locally available materials to set the arm.

Using bamboo as a cast and cloth as padding along with an improvised sling, her arm was set.

She now has a slight bump in her arm but she can use it. The local quack doctor was tying bark around it with string when Babeselle sent me the pictures.  He did have it stabilized but the ends of the bone didn’t meet properly.

Thank God that the Internet connection was so good then.  Now it would be a great problem to send that information.

I’m hoping to soon get an outside antenna so they can get a strong signal again.