I have returned from the Philippines where I was able to spend over 3 weeks working at the children’s home, teaching a little over 40 hours in the school and speaking 6 times at the conference.

I was not able to take as many pictures this time as the Nikon digital camera quit working and I wasn’t able to repair it for a few days.   My phone was not usable as often as in the past as the electricity was very erratic at the children’s home.   Having said all that, I still have about 850 pictures to sort and start posting.

I hope you will allow me a little time to get these posted and sorted.   I see that I still have over 20 hours left in the upload so there will be little or no pictures in this posting.   All in all, it was a good time.

Lilang, is a girl I mentioned before that had contracted Dengue Fever and was bleeding from the mouth and nose.  Her parents took her to the hospital and they were told that she was going to die.   She was put into a room with around a dozen other dying people and left.   I told Inday, who takes care of the children at the children’s home, to go get the same medicine that she had taken when she had Dengue a few months before and give it to Lilang.   Happily, she recovered. 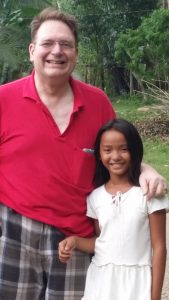 Lilang a couple weeks ago in front of her house. 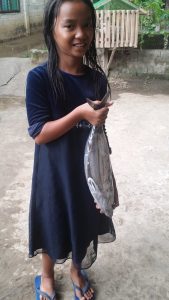 Lilang with a tuna that her father caught on his fishing boat.  I had tuna steak less than 3 hours after it was taken out of the water.