I am going to do something that I very rarely do.   I am going to ask for help.  I will explain what has been going on and then share the emergency.

October has been a very stressful month due to health problems.

Princess was taken by ambulance to the hospital after her mother found her fevered and delirious.   She had an internal infection and a case of Dengue Fever.  She spent 6 days in the hospital on IV medication before she was well enough to send her home.

Kevin and Leray both had cases of Dengue Fever, but they were taken to the doctor early and did not have to be admitted.   The elderly man that volunteers his help, gave Inday the money for his medicine so that they could start treatment before they would have time to tell me what was happening and send funds. 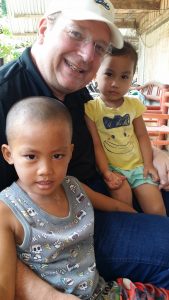 Gregory is and is the man who also helps often, and sleeps in front of the door most nights so if an intruder tries to come in, he will be awakened.   This is a real problem as there have been many times that homes were broken into during the night while the residents slept.

A neighbor that was moving to a different country gave Inday a larger dog of German Shepard mix.   Gregory, the son, was feeding the dog and it bit him.   The bite became infected.  I insisted that he go to the doctor as he was running a high fever.  I also told them to see if they knew if the dog had been given shots.    No one knew anything about the dog’s shots, so I told Gregory to ask about rabies.    The dog did, in fact, have rabies, so Gregory had to have 2 additional shots a week after the first one for infection.   They were quite expensive.

So, you can see why, with all the medical expenses of well over $1,000 USD, we are in a very needy state.

Now to our current emergency.

Gregory is Inday’s father , the grandfather, was walking by the side of the road this morning.  He was hit by a tricycle and left unconscious by the roadside.  He was taken to Dipolog.   This is a city that is about 2 ½ hours away.   He is needing a scan to find out about the bleeding on the head. 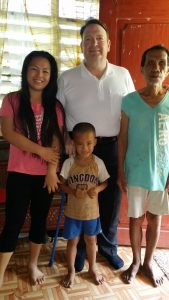 Gregory is on the right

You may ask why we are helping someone who is not a child.   Not only has he helped with no compensation for most of the 11 years that we have operated the children’s home, but he also has often times helped out of his meager resources when children have been in need.

He recently gave the money he had saved for his congestive heart failure medicine to be used for one of the children who had developed an infection.   He has several bad teeth that needed to be pulled.   He took the money he had saved for that and gave it to Inday to buy medicine for Kevin and Leray when they had Dengue Fever so that they could start treatment immediately instead of waiting for it to come from the states.  This early treatment helped keep them out of the hospital.

So that is why we are asking for help.  He has selflessly helped for all these years and it would be wonderful to help him in his time of need.

The most recent update that I have had was this afternoon in Eastern time.   He was in a non-responsive condition.  His right hand was shattered and will need stainless screws to put it back together.   He has a head injury that will require a CT scan to evaluate the damage to the head and to try to find out about the suspected swelling of the brain.

The tricycle driver is being held in jail right now.  He didn’t have lights so that he could see after dark.

In the Philippines, when a person is in the hospital, often a family member or members will stay with them to help with things that are not done by the hospital staff.   In the room where he is right now, the family is not staying in the room due to infection and the severity of his injuries.   To save money so that they have more to help with his treatment and medicine, Inday, Princess, and Gregory’s son, were sleeping in the park under a tree.

If you find it in your heart, your donation would be greatly appreciated.  You can donate through our website.

Thank you for your support and especially your prayers for this worthy situation.

For your information, the funds donated for the building project will be used for that need.  This is a separate need.