I have an urgent prayer request that I just found out about on Monday afternoon.

Inday, the lady who runs the children’s home, got a call from a hospital in Cebu.   They told her that they had a patient who was expected to die shortly and what were they to do with the body.    She asked who the patient was and was stunned to find out that it was one of the young ladies who had been in the children’s home until 5 years ago and was working in Cebu.    Her family lives in Manila now but they are estranged due to family issues.

She had been bitten by a dog and didn’t have the money to get treatment.    Apparently, the people she worked for dropped her off at the hospital and left without giving any information.    According to the doctor’s report to Inday, she seems to be in the end stages of rabies. As I understand the symptoms, it would take a Devine intervention for her to live.

If it’s not His will to extend her life, I would ask for prayer for comfort.

I found a picture of her when I was there last year. She is on the right. 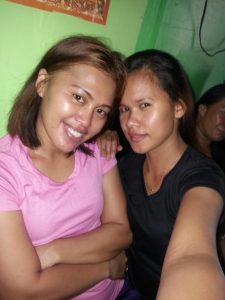