Last week little Leray was using the toilet before her bath and Inday noticed that in her stool was a fairly large worm.   In the past several of the children had gotten pinworms from the municipal water supply, but Inday said that this was about the size of her little finger.

As many of you might remember from the past postings, Leray is a very precocious little girl who turned four years old in April.   Inday told her what she saw and said that she would have to get treated for that problem. 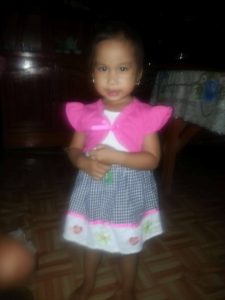 Her brother, Kevin who just turned 6 a couple of months ago, was teasing her and said that she would just have to live with it.  “No, when Daddy hears about it, he will make sure that the doctor takes care of me”, she replied very confidently.   Kevin and another cousin continued to tease her a little bit.

“Why do you think that Daddy will want you to go to the doctor?” they asked her.

“I’m Daddy Junior,” she replied without hesitation.  “He’s LeRoy and I’m Leray.   I’m named after him.”  She was right, as the parents had told me before she was born if it was a boy, they were going to name him LeRoy and if it was a girl, she would be named Leray.

She told her father when he was home for a short time from his work on the ship.  “I am so wonderfully cared for, Papa, I have both a Papa and Daddy that love me and cares for me.”   Her father has thanked me several times for taking special care of Kevin and Leray.

I often think of her when I read in the bible about faith as a little child.   She has total faith that her needs will be met as funds allow and even some of her wants and desires.    After their mother abandoned Kevin and Leray, I have personally sponsored them along with some of the other children.    While the laws between the USA and the Philippines make it almost impossible, I would love to adopt these two and give them the opportunity to grow up where I could take care of them and provide for them all the time.   Since it is not possible, I do what I can for these two wonderful children.

You may also support the children’s home by going to the following link http://hopehomeandschool.com/index.php/support/  one time donations or regular monthly donations are always appreciated.   If you wish to sponsor a child, please contact us and we will work with you on that outreach.