I just about swallowed my teeth this morning and they are very well attached in my mouth. My little Leray has been sick almost all the time for several months. If it isn’t Dengue it is coughing or infections. 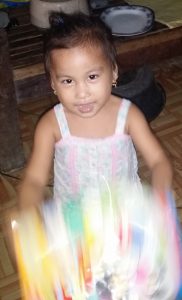 She had been to the doctor this week because she was coughing so badly that her chest was hurting. She had gotten started on the medicine almost 2 days ago and I asked how she was doing, if she was feeling better.
Inday replied that Leray was smoking right now and the doctor said she would feel better with the medicine and smoking.
SMOKING!!!! ???? What??? After I paused a moment, I remembered that several years ago, Inday and I had agreed that there would be misunderstandings from differing backgrounds, languages, and simply different ways of telling things. So I explained that I didn’t understand the comment about her smoking since at 4 years old that was highly improbable under any circumstances.
Inday then explained that she didn’t know what to call it, but the machine had a tube that Leray breathed in the smoke to make her lungs feel better.
Ah, ok. Now I feel better and apparently, Leray is feeling better from her coughing. However, there is some concern because the doctor doesn’t seem to think that her body is getting enough needed vitamins. She is taking daily adult dose supplements, so we are concerned about why she is not absorbing them. He wants to try something different and then possibly get her to a hospital where some testing can be done.