Since it wasn’t stable, Inday wasn’t able to get pictures from inside the building.
There had been some rust and damage to the roof at the children’s home. During the night last night, in addition to the heavy rain, they had strong winds that caused the roof to get crushed when part of a coconut tree broke and fell onto the roof over the sleeping area where 1 adult, 3 teens, and 4 children were sleeping. None of them were significantly hurt, just cuts, scratches, and bruises.
They were about to evacuate in the middle of the night to a neighbor’s house.
The cost to fix the roof and the crushed wall is estimated to be around $700. Any donations for this urgent need would be greatly appreciated. You may donate by going to the website and there is a donation form on the front page. Currently, all but $170 has been raised.   They are stabilizing and repairing what they have funds to work with so they can move back in.  The address for donations is hopehomeandschool.com.
During cleanup, Leray stepped on a rusty nail that went through her foot.   I wasn’t told about it until it was swollen and she was running a fever.  They rightfully got worried because a neighbor lady had done the same thing and didn’t get it treated and died from the infection.   I gave them basic first aid steps until Leray could get to the doctor about a day later.  This morning I got a report that she had gotten to the doctor and got it professionally cleaned, gotten a tetanus shot, and antibiotics so she should be better in a few days.
Below are a few pictures.   The picture of Leray with the sash is from UN day at school when she was chosen to be Miss Thailand. 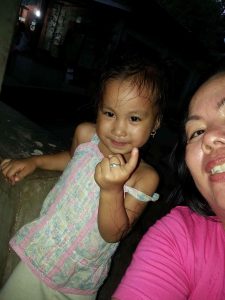 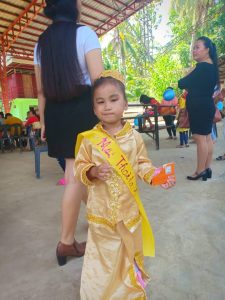 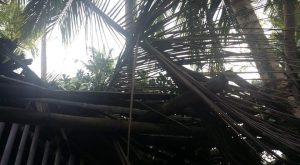 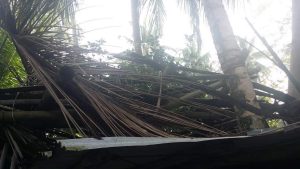