Kevin celebrated his 8th birthday on February 3rd.   He and his sister, Leray, are the only two children who live full time at the children’s home.  They are Princess’ cousins. They live there because of circumstances beyond their control.   The father works onboard ship and is only home for two weeks every two years.   Their mother and father were not married, and she found a “rich boyfriend” in the Middle East and abandoned the family to go there.  She got kidnapped by a person known to run whorehouses and has not been seen since. 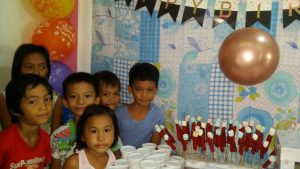 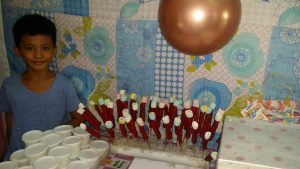 Kevin has lived with Inday since he was almost two years old and Leray was less than a year old.  Anyway, this is the only family he knows.  So, this week, he was surprised with a birthday party.  He told Inday that since he knew “Daddy” (meaning me) has been sick, so I understand that I won’t have a birthday party so don’t worry, I won’t feel bad.  He was surprised when he had a little party.

Hot dogs on a stick topped with a marshmallow and a small cup of ice cream for him and his cousins.  I can’t explain the marshmallow, it is just how they to it there.  It was really a surprise to him when Inday called and told him to come in because she needed him to do something.  There were no gifts but everyone was happy.